Here’s a little update on the fundraising front.  T-shirts have been going out to the twenty or so people who generously contributed at that level.

I’ve also had one taker of the $250 level for fairing display and that was Chris Hodgson from San Jose BMW.  I’ve known of Chris since his days with CC products, having been exposed to the rare BMW motorcycle racing bug through Gregor’s Boxer project.  The engine was stuffed full of CC goodies.  I also met Chris a couple of years ago when he pitted next to Scott’s LSR bike at Bonneville.  I had some of the V4 engine parts with me to show at the AHRMA Miller round and he was like ‘Hey, I follow that project online!’.  It was a rare moment of the student becoming the master, or something like that.  Anyway, Chris dug deep and helped out.  Thanks!

Over the weekend I had the first $500 donor to have his logo engraved on the engine cases.  The person was Lawrence Smith, an Aussie that not only loves performance bikes, and not only knows machining and engineering, but is a FFE (funny front end, an industry term…) advocate!  Amazing!  How do you know he is a FFE lover you ask?  Well, this is his first project bike: 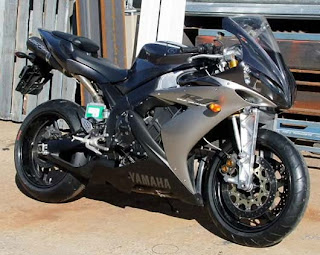 Pretty damn cool looking IMO.  There’s a nice writeup with some pics and video over at TheKneeSlider.  Lawrence is very happy with how the bike performs and in his own words ‘after all FFE is the future’

He sent me some pictures of his next project that just got on the road: 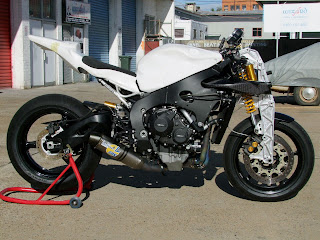 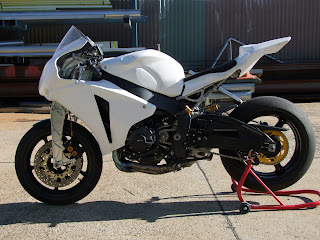 Lawrence took nearly the opposite approach to me in his effort:  he wanted to maximize reuse of an existing bike and do something that would get him riding quickly.  His use of the girder with its steered arms is one of the decisions that made a retrofit easier as he could still use a headstock style frame, although heavily modified in that area.  His results are impressive and allow easy back to back comparisons with stock bikes.  I’m sure that has he gets the geometry optimized it will be a very positive comparison for the FFE.

Anyway, that was really cool of him to contribute to my project when he has his own going on too.  You rock.

Some more swingarm pivot plate machining will be coming soon.