The CAD software I use, Pro-Engineer, has an assembly mode where you can create simplified representations of the assembly you are working on.  One simplified rep I have defined is the ‘Build’ state where I blank parts that are finished and today I went into it and checked off ‘arm-upper-bearing.prt’.  The current build status is: 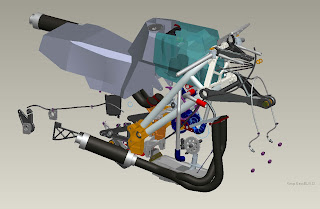 Some days the state of this assembly is depressing and some days it cheers me up.  Today I was in good cheer.  Lots to do, but lots done.  The reason for my cheer is a pair of nice looking multi-axis parts: 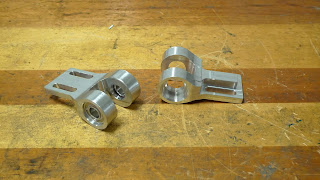 As you can guess, this is the result of the second operation on some of the parts in the last post.  In the previous operation I had machined all of the critical functional features:  bearing bores and locating tongue.  this second operation was merely to remove material along the outer perimeter of the part.  Although it needs to be done carefully to leave a balanced amount of material, the tolerances are much looser than the +/-.0002″ the bearing bores needed.  For comparison that is about 1/10th the thickness of a human hair.

The fixture was simple, a machined boss that would locate in a bearing bore and a threaded hole to clamp the part down.  I also had to machine a step to keep the part from spinning due to machining torque. 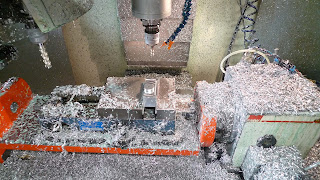 Here’s the part bolted in and being machined. 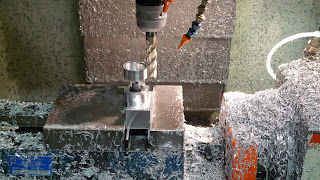 After completing the outer profile I indexed the trunnion and drilled the hole for the trail adjustment screw thread: 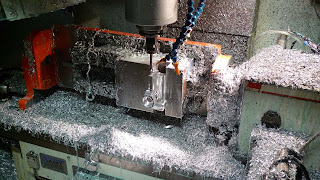 Here’s the part assembled to the steering stem: 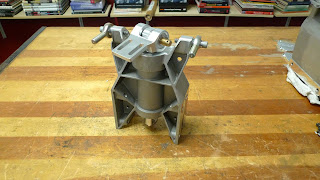 Its starting to look really nice and I guess that’s reason to be happy about the build image.  I’ll do the same for the chassis pivot part of the arm assembly tomorrow and keep the ball rolling.