I was supposed to go to Lime Rock Park today to watch the Porsche Owners Club flog their cars around the track.  While I’m usually up for anything to do around a racetrack when I walked out to the bike this morning at 8am and saw a frozen puddle in the street the 2 hr ride to the track suddenly seemed much less attractive.  I made the obligatory ‘I gotta back out last minute’ call, took the heat, then went back to bed!

After a couple hours more nice warm sleep I decided to make some use of the day and finish up the swingarm pivot plates.  The shop was deserted and quiet, nice conditions to make some progress.

I had left the parts setup in the mill so that realignment for the bearing bore operations would be easy.  I can use the same boring bars used for the engine bearings.  The bores went quickly, so fast I missed them with the camera!  Strike that, I had dropped them in the wrong folder.

Bore out one bearing hole… 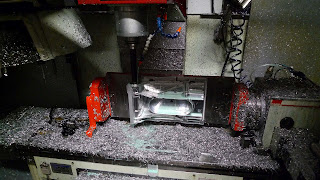 Then flip it and bore the other: 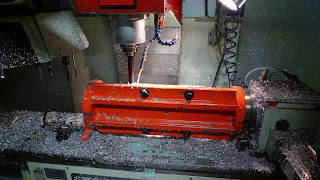 Machining the reinforcing rib tapers and surfacing the outside of the bearing tunnel: 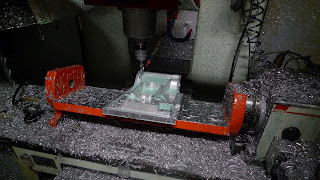 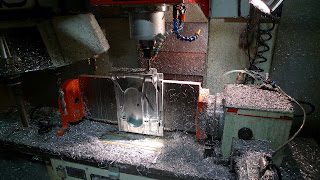 With all the fixtures and programs done and verified, making a second part only took a couple of hours: 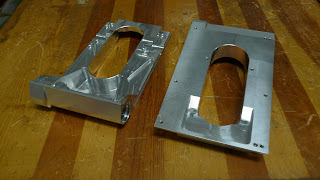 The parts look great and I’m one step closer to getting Scott down for some sheet forming and welding sessions.

Next up is the upper shock mount crossbar, a much simpler part that should go quickly.

Free t-shirt to first person that spots something that’s amiss in the pictures.  Post it in the comments and google will be the time-stamp arbiter.

UPDATE:  here’s the problem that can be seen with a close examination of the second to last picture: 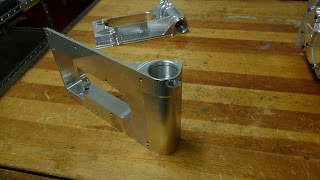 That slot in the bearing pocket shouldn’t be there!  It was a problem with a Z retract value that was defined incrementally instead of absolutely so when the tool went to start the finish pass the Z retract did not retract enough and instead of clearing the part plowed through it.

I’ll have Scott Kolb weld this mistake up and then remachine the bore to size.  Normally there would be a concern about the welded material in a stressed area losing its temper and strength but this part will be heat treated after the entire swingarm is welded so it will then regain its full T6 temper strength.