As with hibernating bears, hibernating motorcyclists eagerly await the first glimmers of spring to start the trek to Daytona, the first major race event of the year.  This year I am lucky enough to get some free time and head down there with Scott Kolb and his Bonneville LSR team.  In addition to spending some time relaxing in warm weather we will be hanging around the Celtic Race Team’s garage to lend a hand if needed.  Barry scored a big win this year in partnering with Fast by Ferracci to run Ducati’s 848EVO in the Daytona Sportbike series.  This bike is a sweet track tool and Barry’s rider,  PJ Jacobsen, showed just how much the competition should be worrying by topping the timesheets at the Daytona tire test.

In the interest of making this a more interesting trip I spent some time getting the engine assembled into a convincing looking long block while Scott whipped up a sweet wheeled engine stand.  We’ll be hanging out in the paddock with the engine trying to get some exposure in the AMA scene.  If we’re lucky we’ll get some time in the Celtic pits with Eraldo Ferracci and see if he has any words of wisdom on our project.  If you see a coupe of guys wheeling around an engine with no bike attached, stop by and say hello. 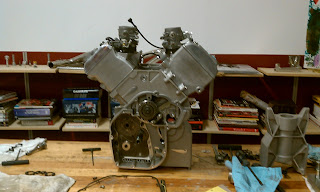 Sorry about the crappy cell phone picture but I was rushing to get the engine assembled in time to put it into Scotts’ trailer for the trip down to Florida.  I don’t think we would be able to bring it on the place as carry-on luggage!