Wow, nothing like a lack of paid work to allow me to get more done on the bike!  Seeing that the clutch side is getting closer to completion I started on the clutch cap, the cover that also houses the helical clutch actuation mechanism.  On race bikes it is crucial to be able to change the clutch plates easily so I did as many racebikes do and made the clutch cover 2 pieces:  one main housing and one small cap that covers the friction plate area.

I had a rectangular block of aluminum that was plenty for 2 parts but just too small (I thought) to get 3 parts out of.  After a bit of creative nesting I was able to make 3 blanks with parallel sides for easy clamping. 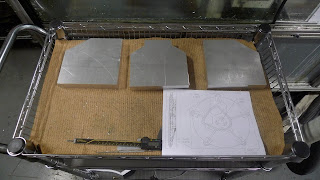 This part is different from nearly all the other machined parts on the bike in that it has a domed surface and curved stiffening ribs: 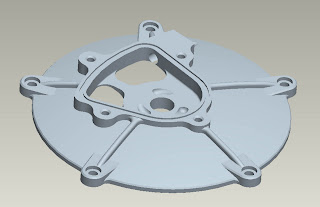 This makes machining more time consuming in that I have to sweep an end mill along the surface with a very small stepover.  The end result is a light and strong part that also looks pretty cool because of the slightly visible tooling marks.

The process starts with a large stepover (producing pronounced scalloping due to the use of a ball nose end mill) and as the remaining material decreases the software reduces the stepoveruntil the remaining scalloping is at an acceptable level. 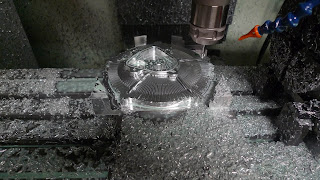 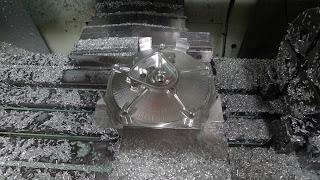 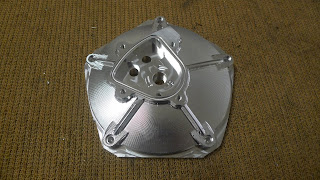 The center area of the part is where the helical clutch actuator will be.  The 3 small arc shaped cuts are helical paths that will have a stainless steel ball installed in. A pivoting plate with mirror image grooves will mate with it and when the plate is pivoted by the clutch cable the balls will ride up in the grooves and pull the outer clutch pressure plate away from the friction discs, thereby releasing the clutch.  It’s not exactly easy to explain but does work.

I was able to get 3 useable parts from the single block of aluminum, one with a weird surface finish due to improper software settings in the finish machine operation.  It does not affect the part’s function and can easily be remachined once the back surface with location features is done.

This part is also unusual in that it will require one mill and one lathe operation instead of 2 mill operations.  The outside of the part is suitable for milling but the inside of the part is a simple revolved surface, making the lathe the appropriate machine to use.  I have a bunch of lathe work to do next week but can hopefully sneak this part in over the weekend.