Got Billy Shears cranking on the radio ‘Getting by with a little help from my friends’ as I review a boxful of rapid prototype parts sent from a friend, thanks again Dave!  He really gave the Replicator2 a workout and I am very impressed with these results from a $2000 machine. 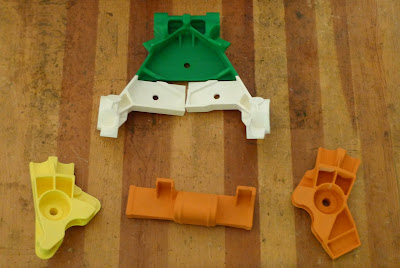 There were a few hiccups along the way and in the process learned a little bit about the community of open source hardware people. In the software world open source has been around a long time.  It basically means that you tell everyone what you did and how you did it and allow them to use it as they please as long as they acknowledge whose work it is and that if they make improvements they then also make them available to anybody in the same way.  Since code once written is virtually free to copy this is a pretty useful approach for some software.  In the world of hardware, eg. nuts and bolts, open source was never really an issue as so few people had the skill or (more importantly) the equipment to actually produce something it was a moot point.

This is coming up because the FDM machine that David had was not working consistently.  We sometimes got parts that were mysteriously incomplete, like thse.  It is an interesting picture nonetheless as you can see the solid lines which are the outer profile of that particular cross section of the part, the horizontal lines of material that are the support structure and the honeycomb shapes that are the interior of the part.  To save time and material and to minimize sinking and sagging issues the parts are not printed as solid but instead are a thin outer shell with the rest of the interior volume filled with a lightweight and material efficient honeycomb.  The result is a light and strong part that does not have sink issues from having to cool thick sections of near liquid plastic. 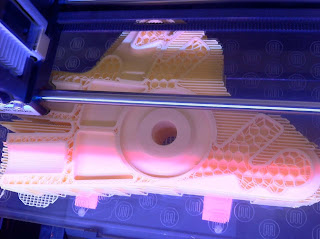 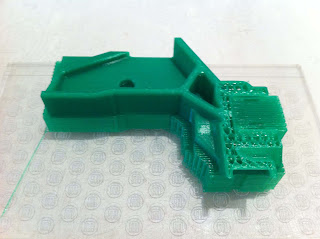 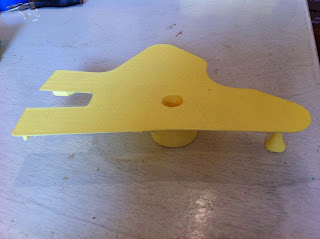 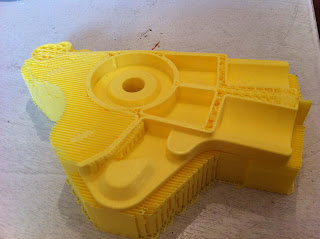 After a bit of investigations David found that other people thought the original filament feed mechanism was to blame (they are correct and Makerbot has updated the design in the lastest model), designed a new system and posted the 3D files to thingverse (http://www.thingiverse.com/thing:42250) with instructions on how to do the upgrade!  Although the improvement worked, needless to say I would not be losing sleep at night worrying about an army of self replicating robots taking over!  We were able to print out the update parts with good results. 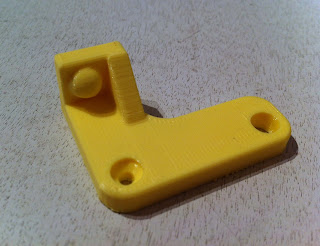 It is possible that the longer and deeper heat cycle that happens with my much larger parts were pushing the machine past its limits. Whatever the actual issue was the feed fix worked and good parts started to be the norm rather than the exception.  Again, this cost the same as a nice laserjet printer did a few years ago!

3 of these parts are single piece and only need to be finished before being used to create a silicone rubber mold.  The surfaces of the parts are still a bit rough to make a mold from but that is normal from most rapid prototyping processes.  I’ll do a bit of the primer and bondo dance to smooth out the surface imperfections then paint them with a gloss coat to seal and provide a smooth surface for the mold to cure against.  The main thru hole and the cross bearing bore will be done using a dowel as an insert for the mold to both help locate the mold halves and to strengthen the mold assembly to prevent shifting during wax injection.

This moldmaking process is well described in this video from Freeman Manufacturing Co.  The only difference is that I will be injecting a wax into the mold instead of pouring in a hard urethane as they do with the model car.

The largest part was too big to produce in one piece so had to be sectioned up.  The various colors have no meaning and are only due to what color was in the machine at the time. 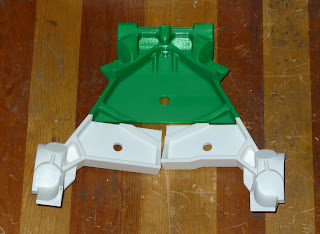 I was going to design some interlocking features but was wary about the resolution of such small features so settled for straight cuts with a small amount of extra material.  I can sand the entire surface with a flat sanding block and when both angled ribs line up it is accurate.  These 3 sub-parts will then be glued together and a mold will be made from the resulting large part.

Once the molds are done then wax is injected to the void to create a consumable core for the investment casting process.  These waxes are then sent to Harbor Castings who will invest the wax (coat it with ceramic slurry), cast, and heat treat the parts.  I hope to have 4-6 of each part run and weld up 2-3 complete chassis at one time.

Once they come back to my shop I have program and make the fixtures to hold the parts and machine them.  Once they are all machined then a welding fixture has to be made and the parts welded up.  Lots of work ahead but its fun and will result in a very visible sign of progress: a chassis!

The goal at this point is to have a complete rolling chassis ready by the beginning of August.  AHRMA, the US vintage racing organization, is having a big event at the local track, New Jersey Motorsports Park, that all of my garagemates are going to.  There will be a big Rev-It display that we will be displaying the bike at.  Depending on how well things progress with this part of the project I am tempted to also show up and race with the Ductax, our single cylinder technology test bed. 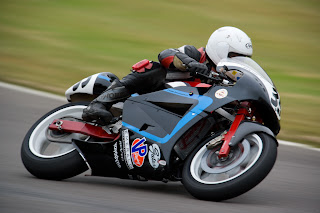 Its been a while since I’ve been on the track and a dose of excitement and adrenaline is sorely needed.  Time to start exercising now!  If anybody interested in the project is in the area please drop by.  Gate fees are reasonable and there is a huge assortment of cool vintage and some modern bikes with lots of racing.