I was able to get some more time in on Peter’s mill and got the journal machining done on all 3 crankshafts. After the last step the cranks were turned but did not have the offset journals machined, as shown in the following picture: 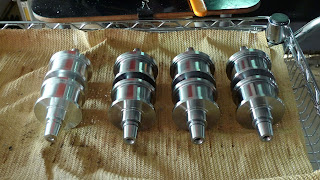 This step moved the parts from the lathe to the mill.  I hold the right side of the crank in a 3J collet and supported the outboard side with a tailstock with a dead center.  The setup is shown in the following picture: 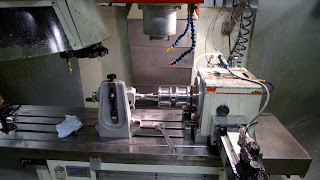 The process is the same as the aluminum test part, except the spindle speed and feeds were much slower, the depth of cut was less, and I used a roughing and finishing end mill.  The finishing end mill was custom ground to have a flat end which minimized the uneven surface that the test part ended up with. 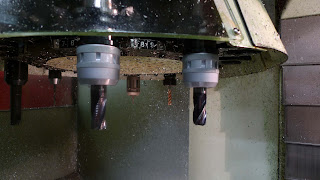 The roughing end mill has a serrated cutting surface and provides an aggressive edge to remove large amounts of material, allowing the finish end mill to only remove the last .02″, last longer, and hold tighter tolerances.  The end mills were purchased from Mari Tool and held in a 3/4 milling chuck for maximum rigidity.

Now on to some cutting shots.  First roughing in a step pattern produces a square journal: 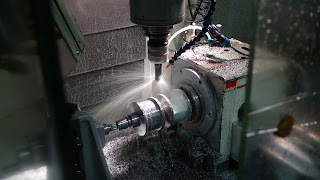 Once both journals are roughed out leaving a square the next operation employs a 4th axis move to create the rounded thrust and journal surfaces: 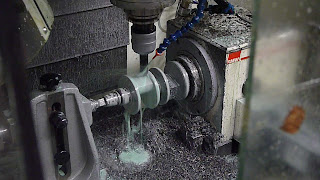 Here’s a couple of videos showing the finishing passes for both the thrust and journal surfaces:

The resulting surface finish and accuracy were excellent.  Here’s a quick spin of the final part.

The great part about CNC is now I ran the same program 2 more times and ended up with 3 great parts. 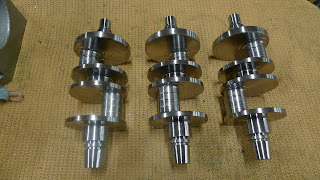 Next steps for the crankshaft are to machine the camchain sprocket teeth and drill the oil holes.  Hopefully i’l get to those operations next week and be ready to ship them out for gear hobbing and plasma nitriding shortly after.

That’s all for now.