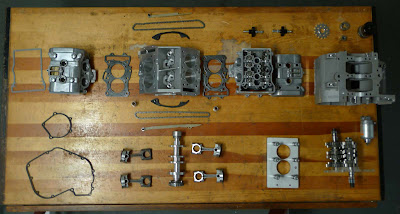 After the rush of the holidays and new year I was able to get more time in on the engine.  I did some long block assembly tests to check fit of all the reciprocating parts. All the parts fit properly and go up and down as the crank goes round and round. 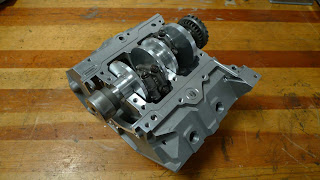 The 180 degree crankshaft was chosen to minimize the fluctuations in reflected crankshaft inertia torque.  This is similar to the idea used in Yamaha’s M1 GP bike and R1 street bike.  Normal I4s have a flat crank which means that when the outer 2 pistons are at TDC the inner 2 pistons are at BDC.  This results in the reflected torque of the entire piston/conrod assembly varying greatly.  At high engine speeds variation can be up to 20 times the combustion torque.  Because this variation is both positive and negative this variation of course does not add to the engine’s output torque. What is does do is overlay a large amplitude noise signal over the small amplitude torque signal, muddying the rider’s connection between the throttle and rear tire.  This Youtube video from Yamaha does a good job explaining the difference in the 2 configurations.  At around 2:30 the details of the inertia torque variations are explained.  Yamaha’s Furusawa wrote a technical paper analyzing the signal to noise ration of various crank configurations which backs this up.

Where I am departing from the status quo is my choice for a screamer firing order.  I am proposing that the minimized crankshaft inertia torque variations is the real reason that Ducati twins seem so much more driveable than the other I4s in WSB.  Single crankpin vee twins by default have a much better crank inertia situation than the normal I4 because of the piston/cylinder bank angle relationship.  I think the whole ‘big bang’ theory is rubbish and therefore am trying to get the best of both worlds- low crank torque inertia variation for improved driveability but a screamer firing order for maximum power potential.  There is a small penalty of having to add counterweights to the crank to reduce the rocking moment produced by the 180 degree crank arrangement but I think the benefits will far outweigh the costs.

You can see the details of this in the following 2 pictures: 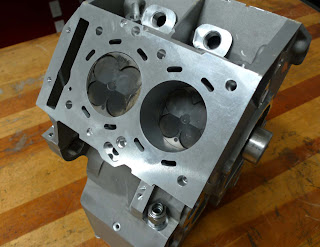 The front bank cylinders are at TDC and BDC while……………. 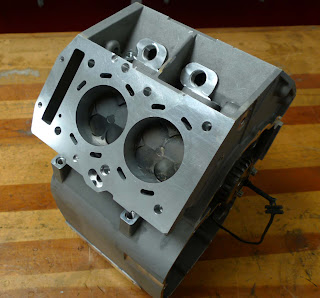 The rear bank cylinders are both at midstroke.   This configuration results in a minimal variation in crank inertial torque and I hope a clean signal from the rider’s wrist to the crank.

You can see the interplay of the pistons in this short video:

Next up is checking out the camchain runs and doing a longblock assembly test with the cylinder heads and cams.  Once this is done I can send both crankcase top parts to Millennium Technologies for nikasil plating and final honing.  While the parts are being plated and honed I have plenty of smaller parts to make, various shafts and both engine side covers.

That’s all for now.