For the past couple of months I’ve not had much time at all to devote to the bike project.  Besides the usually unproductive weeks around the holiday season I had to do some rebuilding of the CNC mill’s 4th axis after discovering an extremely worn worm wheel. 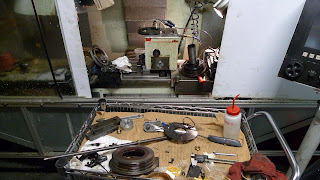 After the rebuild the 4th worked better than ever, which was great timing as I had a major machining project to do.  And it was for a racebike!

Here in the US there are still a few diehard 250 GP guys.  I can’t blame them as a 250GP bike is the ultimate expression of economy of design second only to a 125 GP bike.  One of these guys is Bruce Lind.  He still runs them and runs them fast out there on the West Coast.  Unfortunately, Yamaha’s supply of crankcases is becoming limited, and combined with the flaw of receding bearing inserts, led him to try to have them converted to a billet design and do a short production run.  With the cast cases failing after less than 2 seasons of use if a billet version could be made to last longer it would be worth a slight price premium.  After a false start with a 2 stroke vendor used to parallel twins Bruce managed to find me through the USGPRU messaging boards.  The USGPRU is the sanctioning body for FIM 125 and 250 GP racing here in the USA.  They are doing a great job of integrating the new 4 strokes into the program while allowing people to continue running their 2 stroke bikes.  Under the Team Incomplete banner I had a couple of very fun seasons running parts of their schedule on my RS125.

Its funny how these things work out.  The only reason Bruce found me was that I was making an engine for the class that obsoleted his favorite machine!  Anyway, Bruce saw the progress of the V4 project and decided it was worth a try to move the project over to me.  After some brief discussions we agreed to terms and I started reverse engineering the cases.  They are some pretty complex parts and I knew from the beginning that doing a straight copy would be extremely problematic due to the complexity of a part cast using internal cores. 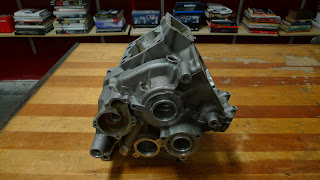 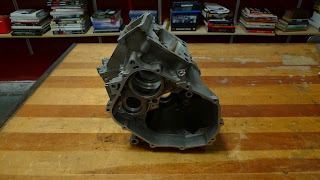 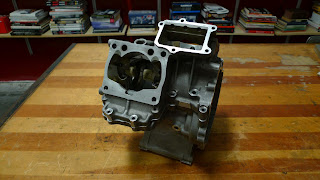 Bruce also wanted to take advantage of the redesign to incorporate the latest porting and stuffing specifications.  Unlike a 4 stroke engine with cams and valves that usually removes material when porting, a 2 stroke porter adds material to the inside of the crankcases to smooth flow between the reed cage and the transfer ports and to alter the compression that occurs in the cases.  These cases were modified by a factory Yamaha race team so had a highly desirable and effective configuration.

The reverse engineering was more a redesign process using the same shaft and bore centers than a strict copy.  In order to be able to machine the parts in a reasonable amount of time I had to convert a lot of the smooth cast surfaces into a faceted version that could be milled accurately and quickly.

Since we would be starting with quite large blocks of aluminum I also needed to find the most economical way to mill aluminum.  Solid carbide end mills, while rigid and capable of high metal removal rates, tend to dull and wear out after a time and then the entire tool needs to be replaced, a wasteful process for such a premium material.. 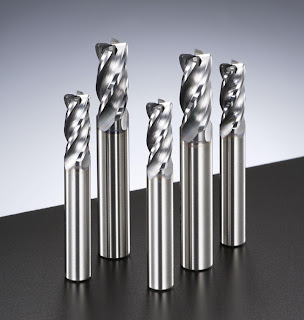 An alternative tool style is to use small carbide inserts mounted to a steel body.  This style of Cutter allows you to quickly replace the dulled cutting edges with replacements at a minimal cost.  A bit of online research led me to a Koroloy insert mill from Curtis Tool.  Curtis was a big help in finding the right insert style for the part/machine combination and an extended toolholder for the deep pockets.  These are pretty mean looking big carbide inserts that cut aluminum like the proverbial hot knife through butter. 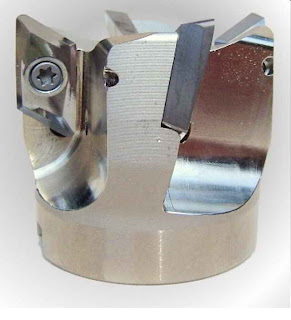 I purchased 2 versions, a short 2″ diameter version for the majority of the roughing, and a 1 1/2″ version on a long extension for the deep gearbox pocketing. 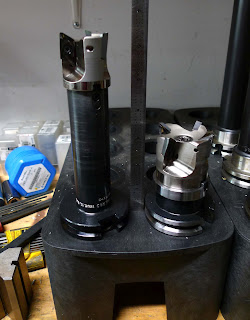 Even with 6″ of projection the cutters worked great with no chatter.

Here’s a couple of shots of the assembly so far.  The upper part is complete and the lower part is mostly complete.  Once the final outer pocketing is done the parts will be assembled and then all the bearing bores finish machined as a matched pair. 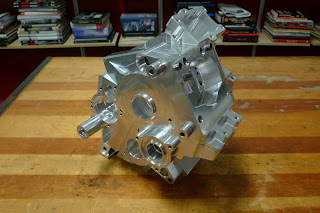 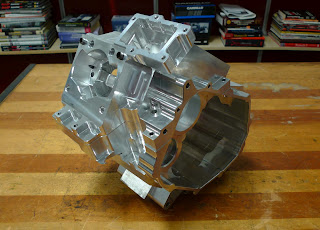 The top part was made from a medium size billet that I bolted directly to the trunnion table: 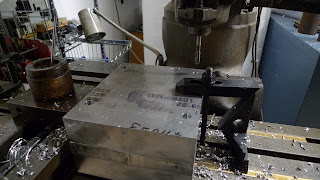 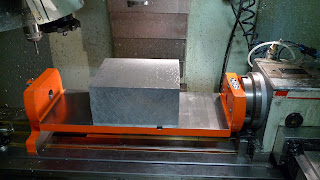 After a whole lot of machining the resulting part emerged: 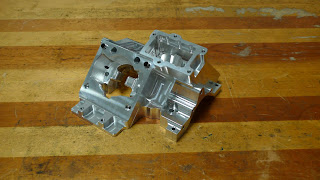 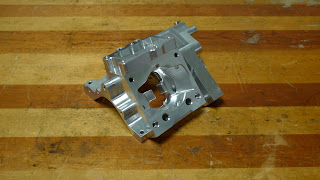 The lower part was made from an obscenely large chunk of aluminum.  It was so tall I had to manually load tools because of clearance issues! 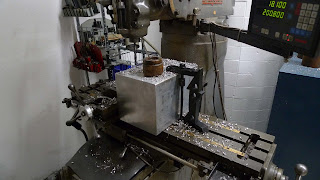 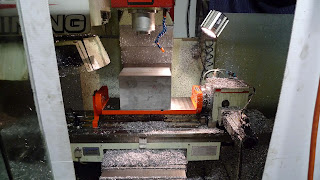 The final version of this part will weight less than 10% of the original billet weight.  Most of the internal and detail work is done, all that is needed to finish is the external clearance routines then final boring. 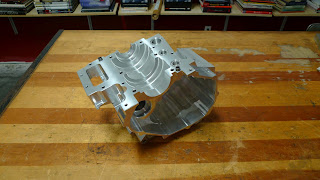 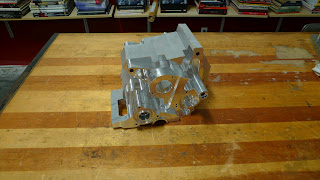 These parts are by far the most complex billet pieces I’ve made so far.  My V4 engine castings were of a similar complexity level but since they were castings there only was a relatively small amount of actual metal removal and the multiple part orientations were relatively easy to relate to each other.  These pieces started out as a giant block and evolved though various orientations and machining operations.  The enormous amount of metal removed made both the machine time much longer and that much harder to visualize.  I was glad to get this far with no errors or machine crashes!  I have a much greater respect for sculptures after doing this project.

If you still run a 250GP bike and need a new set of cases please contact Bruce and order up a set.   The same goes for anyone that wants the coolest set of bookends ever.  I’m almost done with the first set after which Bruce will assemble and test them.  Once any final tweaks are integrated into the machining programs we’ll go into production.

On the other hand, if you have a part or engine or entire bike that you’d like to reproduce, give me a call and we can work something out.

Once this set is finished I will get back on track and resume machining bike parts starting with the upper control arm.  Hopefully that will happen next week.