I know the last post said the next one would be doing the oil pump shafts but I changed my mind and decided to do something a bit more complicated and settled on machining the steering arm castings.  They’ve been lying around a while and are definitely aged enough.

This part is roughly equivalent to the upper triple clamp on a conventional motorcycle.  Unlike an upper triple clamp this part is not subject to suspension loads, only steering forces.  The dual drag link configuration is designed to transmit maximum feel from the front upright-wheel assembly to the rider’s hands. 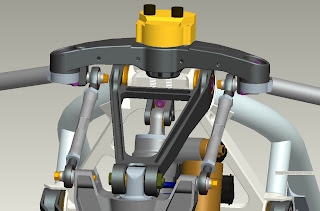 The raw castings are shown here with a fresh fixture sub-plate and the material stock for the mounting fixture: 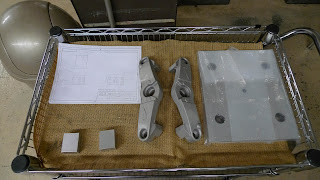 I manually machined the 2 fixture blocks that would mount onto the fixture sub-plate and the part would be mounted on. 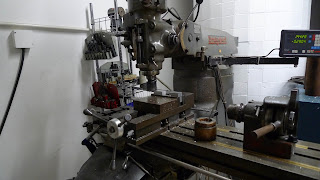 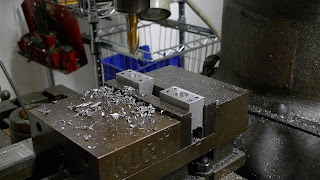 The completed fixture assembly is shown installed on the trunnion table. 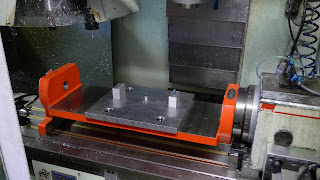 It is a pretty simple fixture but does require locating pads and holes to be premachined on the castings.  This is a simple enough operation that it can be done on the manual mill too: 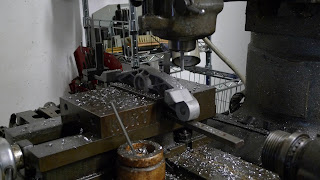 Now the part bolts directly to the fixture and has one small preload bolt to eliminate chatter when machining the center bearing features. 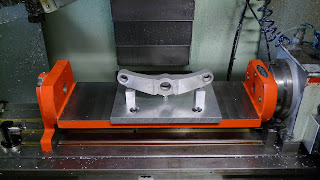 In the 0 and 180 degree orientation we machine the center pivot bearing pockets, clip on mounts, rotary steering damper mount, brake reservoir mount, and logo.  There’s not much material removal so it only takes a few minutes. 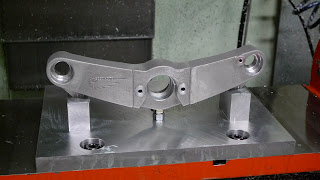 I then index the fixture plate 90 degrees and machine the steering drag link bearing mount holes on each side of the part.  This is another quick operation and proceeds with no problems: 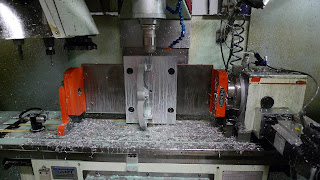 That completes the part. 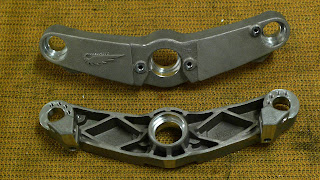 Now reload and rerun a few times and I have 4 machined castings ready to use: 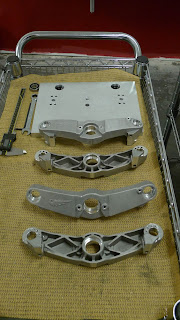 That’s all for now.  I think the next part will be the front spider which will allow me to test assemble the upright assembly.